Dispatches from the Struggle with Dr. Sam Anderson: Community Control of Schools Then & Now; The Fight Against Privatization Continues

Community Control of Schools Then & Now: The Fight Against Privatization Continues

In this final Dispatches from the Struggle, Dr. Sam Anderson, co-founder of the The NYC Coalition to Finally End Mayoral Control 2022 (CFEMC), founding member of the Black Panther Party, and former member of Student Nonviolent Coordinating Committee (SNCC), will join us to discuss the historical and current conditions of community control of schools and the fight against privatization of education in New York City.

Dr. Sam Anderson is a retired mathematics and Black history professor who has been active in the Civil Rights and Black Liberation movements since 1964. Being a member of Student Nonviolent Coordinating Committee (SNCC) and a founding member of the Black Panther Party has allowed him to combine his decades-long activism with his scholastic work. Dr. Anderson is a co-founder of The NYC Coalition to Finally End Mayoral Control 2022 (CFEMC).

Dr. Anderson will discuss a historical overview of the privatization of New York City public schools. The 1969 New York Education Act grew out of a movement to demand decentralization and community control of the New York City school system. The Act removed the City Board of Education from mayoral control and restructured the New York City public education system. In a compromise, governance policies were transferred to the Senate and the Assembly in Albany, New York. The educational governance of predominantly Black and Puerto Rican Communities in New York City was controlled by white dominance.

Over 50 years later, Black and brown communities still feel the wake of the white dominance of the late 1960s in our public school governance policies. Dr. Anderson will discuss the contemporary era and the struggle for community control in opposition to mayoral control. Additionally, he will discuss the fight from students, educators, and community members for full community control as envisioned by the Peoples’ Board of Education.

Check out this amazing 2020 Free CUNY Infographic on the CUNY Digital History Archive (CDHA) website explaining when CUNY was free until 1976: https://bit.ly/FreeCUNY_Infographic1976

This tweet from May 2020 is an infographic, created by the CUNY activist group FreeCUNY, and tweeted out by a CUNY faculty member, depicted the history of CUNY’s costs to students until the mid-1970s and the social and economic benefits New York City reaped from its free tuition policy.

This item is part of the City University of New York (CUNY) Distance Learning Archive, a group project developed as part of Prof. Matthew K. Gold’s Spring 2020 Knowledge Infrastructures seminar in the Ph.D. Program in English at The Graduate Center, CUNY, in partnership with the Interactive Technology and Pedagogy Certificate Program. The project’s goal was to resist or trouble the discourse of catastrophe around the shift to online learning caused by the COVID-19 pandemic by documenting the lived experiences of students, faculty, and staff across CUNY’s 25 campuses. Further, the project wanted to document the moment of crisis response by taking a critical approach to educational technology. 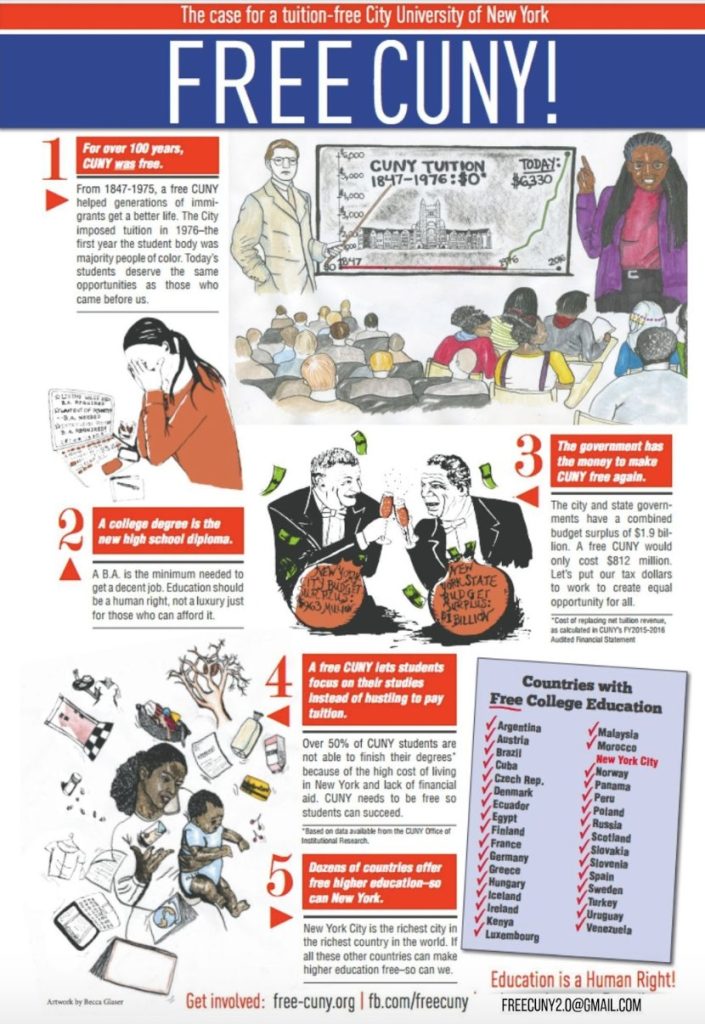 Also, check out this critical piece from by Sean Molloy:

For example, in 1960 there were only 70,000 black students at all white US colleges, comprising only 2.4% of their total enrollment of 2.8 million students. But African-Americans constituted close to 13% of the total college age population, such that their equal proportional representation in white colleges would have been 364,000 (Molloy, 2016, pp. 40-41; Crossland, 1971).

In the 1950s and 1960s, New York City was changing rapidly as “great migrations” of black and brown residents moved into the City from the American South and from Puerto Rico as throngs of white, middle-class families moved to nearby suburbs. From 1954 to 1964, black and Puerto Rican children increased from 29% to over 50% of all New York City public school students (Gordon, 1975, p. 35). By 1960, black and Puerto Rican students made up 75% of Manhattan elementary school enrollment (Ravitch, 1974, p. 261).

In theory, these black and brown New York City public school students had equal access to CUNY’s tuition-free colleges. But in practice, only a token few were admitted. In the mid-1960s, CUNY’s student body remained “by all accounts” 94 to 97% white (Warren, 1984, pp. 2, 35).

In 1963, Republican Assembly Speaker Joseph Carlino directly charged CUNY with unfair racial exclusion. According to Carlino, “only 1.9 per cent of the [CUNY] student body was Negro.” As such, CUNY “had become a haven for the elite,” with high GPA requirements that forced black and Puerto Rican students “to forgo college” (Currivan, 1963, November 27).

The NYC Coalition to Finally End Mayoral Control 2022 (CFEMC) is a newly formed, Black-led Coalition of grassroots, NYC activists who have been engaged in the struggle for education excellence and equity for a long time.

Our efforts are built on a foundation of human rights and our aim is to create a unity movement across the 5 boroughs with an understanding of the dire need to completely change the governance structure of our schools.

NYC students can no longer afford the toll on their futures from legislators who want to “keep-but-tweek” mayoral control again. No measure of reform will ever make this terrible system work for a million+ diverse students.

The Adjunct Project is working in solidarity with CFEMC’s to demand an end to NYC Mayoral Control of privatization of education and for human rights across New York City schools.

Questions? Contact the Co-Organizer of External & Labor Relations at the Adjunct Project and Founder & Organizer of Dispatches from the Struggle, Jamila Hammami, jamila.hammami[@]pm.me or on social media @JamilaMHammami

Direct Action in Albany on March 23!!!

Join us on Wednesday, March 23, for a direct action with the PSC in Albany!

The PSC asks that everyone participating in the direct action should attend a training session at one of these two times: Sunday, March 20th at 5pm and Monday, March 21st at 7pm. Both trainings will take place in the PSC office (61 Broadway, between Rector and Exchange, 15th floor), and there will be dinner for attendees.

A contingent of GC people will be leaving with the bus from the PSC offices — so please join us! If you plan on participating, contact Rob Murray at the PSC (rmurray[at]pscmail.org) to let him know you’ll be going, which bus you’ll be on, which training session you plan to attend, and if you will be risking arrest or participating in a supporting role.

Please see Barbara Bowen’s letter to all PSC members with more details about the purpose and scope of the action below.

Dear Members,
At a special meeting on Friday night, the PSC executive council voted to take direct action against the proposed State budget, which imposes fierce economic austerity on CUNY and other public services while protecting the wealthiest New Yorkers and the corporations from paying their fair share.
On Wednesday, March 23, the PSC will lead a peaceful, non-violent protest in Albany , during which some of us are prepared to risk arrest to stop an austerity budget from passing.  I am writing to ask you to join us.  All who want to participate in peaceful protest are welcome.  There will be important support roles for those who choose not to risk arrest.  Contact Rob Murray, Organizing Director, at rmurray@pscmail.org or (212) 354-1252 to sign up.
This is a defining moment in national and New York economic policy; everyone who cares about economic justice should try to be there.
Throughout the spring, the PSC has vigorously advocated for a fair budget.  Last week we exceeded our goal of ten percent of PSC members sending messages to Albany .  And those messages have made a difference, most visibly in the State Assembly’s budget.  During the past two months PSC members have testified, lobbied, and rallied; today we marched through the legislative building in Albany with hundreds of chanting students, faculty and staff from both CUNY and SUNY.  All of these activities have been essential, and have made it possible for us to take an even more forceful stand now.
We are taking a stand because of what’s at stake. The governor’s budget slashes funds for schools, colleges, CUNY, healthcare and many other public services, yet includes a tax break for the highest earners. The State Assembly’s budget restores some funds to CUNY, but leaves in place a ten percent cut to the CUNY senior colleges, while only partially revoking the tax break for the top earners.
Without a fundamental shift in direction, the budget passed in Albany will force economic austerity on working people in order to concentrate even more wealth among the rich. Income inequality has not been this extreme in the U.S. since the eve of the Great Depression, and the state with the greatest inequality is New York.  Economic austerity for ordinary New Yorkers will not lead to economic recovery; it will lead only to increased poverty, blocked opportunity, and a greater concentration of wealth and power.
That’s why we are taking a stand on March 23 in Albany —and inviting all New Yorkers who care about economic justice to join us.  The PSC will provide transportation and training.  Please sign up to come, and invite your colleagues and students.  As always, you must provide for coverage of your own work responsibilities at CUNY.  Once you have signed up, we’ll send you more information about the event and the plans for the day.  Several community groups and SUNY colleagues have already signed on to join us; I hope you can be there too.  Click here to sign up.
Risking arrest is a serious action, and we do not take it lightly.  But this is a moment at which we cannot stand by.  In the last few months, we have seen how peaceful collective action can change the course of history.  As we approach the April 4th anniversary of Martin Luther King’s assassination, we might invoke his analysis of the union campaign he was supporting that day in Memphis: “a moral struggle for economic justice.”  That’s the struggle we plan to bring to Albany on Wednesday, March 23; I hope you can be with us.
In solidarity,
Barbara Bowen
President