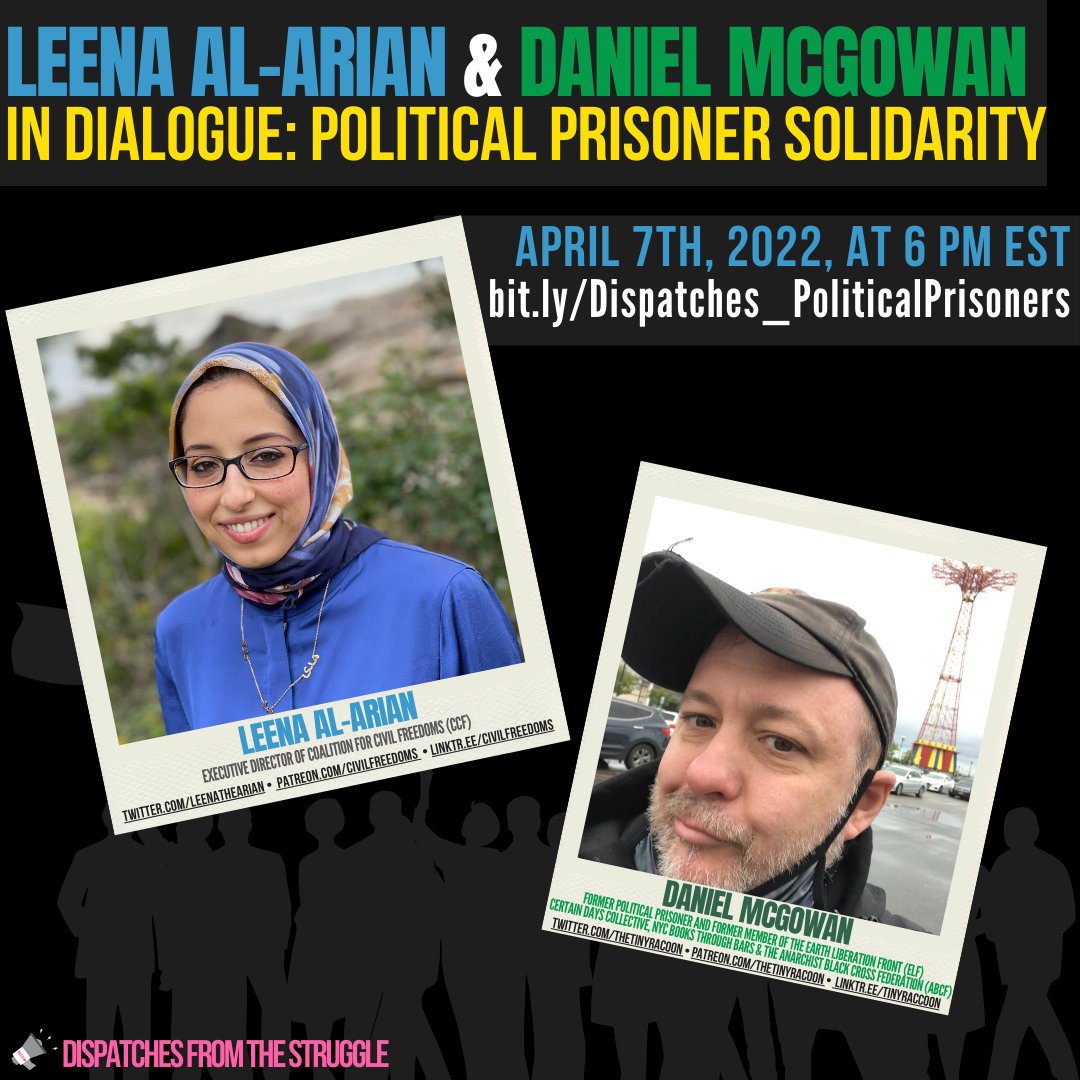 Join Dispatches from the Struggle in welcoming Leena Al-Arian and Daniel McGowan! They will bring their decades of experience to engage in dialogue on their intersecting and collaborative work defending the civil liberties and freedoms and advocating for the rights of Muslim & Activist political prisoners, with moderator Jamila Hammami, Co-Organizer of External and Labor Relations at the Adjunct Project.

In 2011, it was revealed that CUNY personnel shared Muslim student records in violation of the Federal Educational Rights* and Privacy Act (FERPA) in support of the NYPD’s surveillance apparatus against Muslim students at CUNY.
Between 2003 and 2006, Baruch and Brooklyn Colleges deployed NYPD as undercover police in its Intelligence Division Cyber Unit. Additional police documents refer to the use of “secondary” undercovers at Hunter, CCNY, Queens, and LaGuardia. Undercover law enforcement attended and surveilled events put on by Muslim student groups, totaling seven CUNY Muslim Students Associations that were infiltrated. The surveillance apparatus resulted in devasting consequences on the education of Muslim students at CUNY. Through interviews, students noted fear of reports of fear of speaking in classes, engaging in-class activities, and experiencing constant fear of classmates and professor suspicion. Come and watch to learn more about how Muslim political prisoners are interconnected with spying in higher education.
Leena Al-Arian is a Palestinian-American organizer and human rights advocate based in Massachusetts. She is the Executive Director of the Coalition for Civil Freedoms (CCF), a survivor-led nonprofit advocacy organization that was founded in 2010 to challenge the abuses of the domestic “war on terror,” including the post-9/11 criminalization of Muslim communities, profiling, preemptive prosecution and the targeting of individuals based on manufactured or thought crimes, excessively harsh prison sentences, and inhumane prison conditions. Leena has worked at a number of human rights and civic engagement nonprofits including American Muslims for Palestine, United Voices, and the Middle East Children’s Alliance. She holds a master’s degree in Middle Eastern Studies from the University of Chicago. She is a contributor to the volume, Being Palestinian: Personal Reflections on Palestinian Identity in the Diaspora (Edinburgh University Press, 2016).
Follow, learn more, & support Leena & CCF’s work: Leena’s Twitter, CCF’s Patreon, CCF’s Linktree.

Daniel McGowan is a former political prisoner and former member of the Earth Liberation Front (ELF). He spent 48 months in experimental Communication Management Units (CMUs) operated by the federal Bureau of Prisons during his seven year sentence. Daniel has been involved with political prisoner support and prison struggles for most of his activist life. He is currently a member of the Certain Days collective, NYC Books Through Bars and the Anarchist Black Cross Federation (ABCF). Daniel works on the campaign to defend and free anarchist political prisoner Eric King and is an advisory board member of the Civil Liberties Defense Center (CLDC) & the Coalition for Civil Freedoms. Daniel is a lifelong New Yorker and grew up in Far Rockaway, Queens, NYC. He works  professionally as a paralegal and consults with people preparing to go to prison and their family & friends in setting up defense committees.

Check out these critical readings from the PSC-CUNY union as well as CAIR, the Intercept, and the film, Watched:
– NYPD Spy Scandal Hits CUNY: Muslim Students Target of Profiling by PSC-CUNY
– Muslims want answers on surveillance by PSC-CUNY
– New film uncovers pain of spying at BC by PSC-CUNY
– “I Feel Like a Despised Insect”: – Coming of Age Under Surveillance in New York. The Intercept. Theoharis, J. (2016, February 18).
– Mapping Muslims: NYPD Spying and Its Impact on American Muslims. CAIR. (2019).
– Watched by Mitchell, K. Collective Eye Films.

Questions? Contact the Co-Organizer of External & Labor Relations at the Adjunct Project and Founder & Organizer of Dispatches from the Struggle, Jamila Hammami, jamila.hammami[@]pm.me