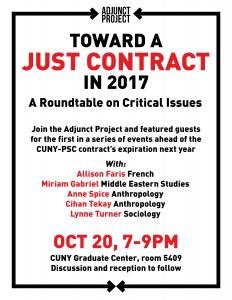 Today the Adjunct Project hosts our first formal event of the academic year, the kick-off to our “Toward a Just Contract in 2017” series we’ll be presenting through the current CUNY-PSC contract’s expiration in November 2017.

For this event, we’re focusing on some of the many issues that were largely, or totally, omitted from the last round of bargaining that resulted in the contract just ratified this past August—and the issues that need to be discussed, amplified, and centered in the next round of contract bargaining between the PSC and CUNY.

Look for notes from this event to be posted here, and mark your calendars for two more events this fall semester:

(1) a news conference we’re holding to announce the results of the hours-worked survey (which you can still take!) at 1p on Wednesday, November 16th, at the Graduate Center (GC), and

(2) another roundtable, this time focused on graduate student-workers of color, for which we’re collaborating with the GC’s Teaching and Learning Center, at 5:30p on Monday, December 5th.

In addition to these events, we’re working on and involved in a number of other initiatives, so feel free to reach out to us to find out more or to get involved.

And—feel free to use the hashtag #justcontract2017 in connection with any of these events, or to raise your own points and issues at any time. We’ll make sure to retweet you!

Toward a Just Contract in 2017: A Roundtable on Critical Issues
Avatars by Sterling Adventures