The Adjunct Project says NO! to the Amazon headquarters deal 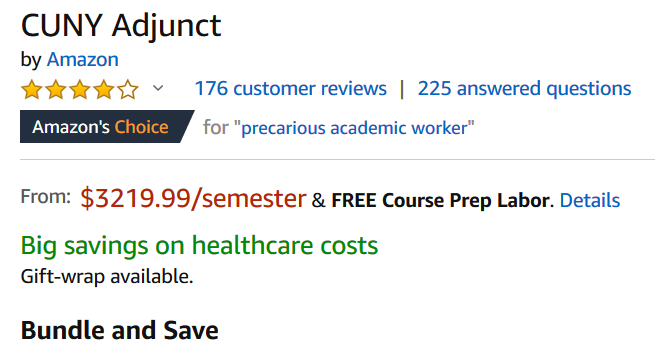 On November 13th, Amazon announced that New York state and city politicians have pledged up to $3 billion in tax incentives to fund its new headquarters in Long Island City. That same day, CUNY Board of Trustees Chair William Thompson Jr. declared that CUNY would be “a lead partner in Amazon’s exciting headquarters expansion” and promised to “commit our considerable college assets to ensure that Amazon has a strong pipeline for talent, ideas and innovation.” Interim Chancellor Vita C. Rabinowitz expressed her wish for CUNY to “provide skilled graduates” to Amazon.

Meanwhile, the almost 12,000 adjuncts who teach the majority of CUNY’s classes receive an average of $3,500 per course, over 30% of doctoral students are underfunded, and tuition continues to increase. The same exceptional student body that CUNY offers up to Amazon must contend with limited (and often unpaid) support from overworked and underpaid adjunct faculty. We struggle each semester to piece together work and funding to stay enrolled. And all the while, our campus infrastructure is crumbling as per-student investment plunges.

Amazon has both astronomical wealth and a long and disturbing record of labor abuses. Local Queens tenant and worker organizations have made it clear that the arrival of Amazon’s headquarters would be disastrous for residents, including CUNY students and their families.

Although CUNY administrators have voiced support for undocumented students and the sanctuary campus movement in the wake of Trump’s assault on the Deferred Action for Childhood Arrivals (DACA) program, Amazon provides critical infrastructure for Immigration and Customs Enforcement (ICE). New York’s corporate welfare – and CUNY administrators’ effusive support for it – is a shameful endorsement of a company that profits off of deportations and the separation of children from their parents.

The Adjunct Project, which organizes with CUNY adjunct faculty and graduate student workers, condemns CUNY’s support for the Amazon headquarters deal. We call on CUNY administrators, city government, and state legislators to withdraw our “considerable college assets” from subsidizing an anti-worker, pro-ICE, $1 trillion corporation, and to reinvest in CUNY’s students and employees. We demand: a just union contract, including a minimum rate of $7,000 per course for adjunct faculty; full and fair funding for all doctoral students; and a tuition-free CUNY.